I recently decided to rearrange my VHS collection from an alphabetical layout, to a more aesthetically pleasing method, sorting by film studios. A few options had been rolling around in my head at the time. One was to sort them into their age classification. Another was to organise by genre, and also into chronological order. All options looked very time consuming, but fun for me, of course.

When I finally settled on film studios, I quickly realised that this would not be possible due to many films being released by two studios on one VHS cassette. Another problematic scenario was how to actually locate my films. Would I have to remember that my VHS copy of Once Upon A Time In America is the Warner Brothers/Weintraub one? Or do I have the EMI version? Hmm… It appeared to be all memory based, like Rob Gordon’s vinyl in High Fidelity. 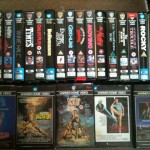 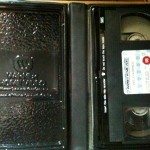 After much deliberation (and also moving the best part of 400 films to the floor), I had a change of heart and decided to place them back into alphabetical order. This is the order in which they will remain for many years to come. I did however manage to get one positive thing out of ‘the move’. It helped me to remember how amazing the various studio logos look on the VHS boxes.

During a series of posts, I will be gathering together all of my films (most of which are in their original cases) and will be posting them on here for the world to see. I will try and skip the more mainstream movies that I own from the mid to late 90’s, and instead concentrate on the tapes from the 1980s. Some of the companies will include CIC, CBS FOX, EMI, VTC, MEDIA and SC VIDEO.

I thought it would be best to start with Warner Brothers. Here I have tried to focus on the large ex-rental cases. These best symbolise my memories of a local video store, Video Vision, which closed down about 8 years back.